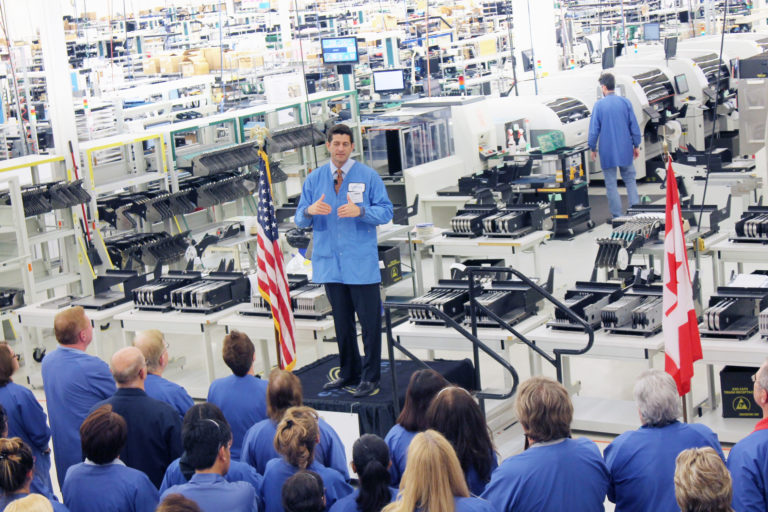 Made in the USA

There is a certain element of pride whenever you can say you build and sell your products and services domestically. But just as big a thrill is knowing that your elected officials support what you do.

Less than two months ago, Congressman Paul Ryan (Wisconsin) took time out of his busy schedule to visit Creation’s Oak Creek, Wisconsin business unit and show his support for our company and the U.S. manufacturing sector as a whole. This week in Washington, he was officially elected as the 54th Speaker of the House of Representatives.

During his visit to Oak Creek, Rep. Ryan spoke about the global impact of innovation within America’s electronics industry.

“Creation Technologies is on the cutting edge of our economy. They’re promoting innovation and creating the jobs of the 21st century. We’ve got to streamline the regulatory process so more manufacturers in southeast Wisconsin can expand opportunity from the bottom up,” said Congressman Paul Ryan.

Rep. Ryan’s visit was in conjunction with IPC’s “Meet the Policymakers” program, which resulted in government leaders visiting three of Creation’s U.S. locations in the past year. In addition to Congressman Ryan’s appearance, IPC has helped coordinate visits from U.S. Rep. Tim Walz (Minnesota) to Creation–St Peter and U.S. Rep. Sam Johnson (Texas) to Creation–Dallas.

With Ryan’s new position, many are optimistic that domestic manufacturing will continue to get stronger, enrich communities, and keep America on the cutting-edge of technological advancement.

IPC Congratulates Congressman Paul Ryan on Election to Speaker of the House of Representatives Statement from John Mitchell, IPC President and CEO